Inspired by a little-known picture book from the pen of Bethany Tudor, this is a diary, of sorts, where I document some of my thoughts, activities, and ideas as I explore the challenges met by the characters in the story: hard work, the care and nurture of others, housekeeping skills, life changes, charity, community, and cooperation, among others. Like Samuel and Samantha, the ducks in the tale, I struggle and succeed, cope and celebrate, work and play, handling the tasks that come my way. I invite you to join me on my journey.

As many of you know from watching The Weather Channel or one of the major media outlets, Hurricane Sandy/Superstorm Sandy (or as I like to call her, "Frankenstorm" Sandy) has exited New England and the Tri-State area --- New York, New Jersey, and Connecticut --- but in her wake lies miles and miles of destruction.

My family lives a few miles inland and uphill from Long Island Sound in southeastern Connecticut, so we were very protected from the most concerning component of Hurricane Sandy:  storm surge inundation.  We prepared more for wind and post-storm disruptions...and emerged most fortunate;  in fact, ridiculously fortunate, for which I am heartily thankful.  The extent of our damage was embarrassingly minimal:  one branch off our old silver maple in the backyard and a flowerpot that was broken because it was improperly stowed in the garage.  Originally, I thought two branches had succumbed to the wind, but the second branch was actually from our neighbor's tree.  We never lost power, despite several flickers at the height of the storm that caused our clocks to require resetting, and our water/sewer service has functioned without a hitch.  As I said, we were ridiculously fortunate.

Sadly, many residents in southeastern Connecticut and western Rhode Island cannot say the same.  Among the hardest hit in my area were the communities of Stonington, Mystic, Niantic, Old Saybrook, Madison and Milford, along with Westerly, Rhode Island.  My family frequents many of these towns weekly, so we feel for the residents who have returned home from evacuation to find, in many cases, profound destruction.  We know homeschool families in these communities.  We attend church in Niantic, take music lessons in Stonington, frequent dance classes and sometimes help with handbell rehearsals in Mystic, practice the organ in Madison, attend (or give) concerts in Westerly, and often lunch in Old Saybrook on our way to and from many events and commitments.  The amount and extent of devastation along the shoreline here is mind-boggling, although it pales in comparison to New York and New Jersey.  I only pray that the power restoration and clean up is swift so that life for these folks can return to "normal" (whatever that is) as soon as possible.

I pray, too, that the months ahead are mild of weather and uneventful, as an encounter with some mutant Nor'easter that looks and acts like a hurricane would be most unwelcome, as unwelcome as Sandy, the hurricane that looked and acted too much like a Nor'easter.

The Week in the Day
Pictures from the week prior to Sandy's arrival.

Northeast Reeling from Sandy's Punch
A collection of photographs, mostly of New Jersey, from the Providence Journal

Damage in East Lyme After Hurricane Sandy
Photos of the town where my family attends church (from the Hartford Courant)
Posted by Plush Duck at 1:45 PM Links to this post
Life Challenge: Weather 3 comments

For the second time in fourteen months, I am sitting in my house with the windows boarded up, listening to the wind howl outside.  By current estimates from the local authorities, that wind is going 80-90 mph and is well on it's way to wreaking havoc across southeastern Connecticut.  My friend, Kerrie, just posted a picture of her house on Facebook.  The large pine tree located in her east lawn is now leaning on the roof near her kitchen.  Thankfully, no significant damage is apparent.  Several of my other friends who live on the shoreline had to evacuate due to the forecast storm surge, expected to be 6-11 feet with the next high tide around 10:00 PM today.  The large silver maple tree in my backyard lost two small-to-moderate branches this afternoon when the wind was only going 50-60 mph.

That tree was my initial reason for boarding the windows again this time.  I was concerned about branches breaching the south-facing windows should the tree come down.  But now that I have been listening to the wind for more than three hours, I think boarding against the wind alone was a good idea.  In fact, it has me considering a more permanent solution that is easier (and faster) to implement than screwing plywood into the wooden window trim every time a big storm comes our way, which seems to be occurring more often than I would like.

If you would like to read an example of what my family and I did to prepare for "Frankenstorm" Sandy, check my Hurricane Irene entries from 2011.  I will post an update once the Halloween Horror Storm is over.

The Sacrament of Penance (Part 2)

What I am exploring with these notes is the question:  what is this faith?  In looking at this question, it is important to remember two things:  1) for Luther, the comfort and consolation of the believer is paramount, and 2) a key passage relating to penance is Matthew 16:19:

In Part 1, I only looked at the first two paragraphs of "The Sacrament of Penance."  This time, I will be furnishing my notes on paragraphs three and four.  Read more.
Posted by Plush Duck at 9:02 PM Links to this post
Life Challenge: Faith/Religion 0 comments

Earth and All Stars

Last week in church, the closing hymn was "Earth and All Stars," one of my favorites and one that my daughter recently informed me was written in 1964 for the ninetieth anniversary of St. Olaf Collage in Northfield, Minnesota.  The hymn was initially published in 1968 as part of a folksong collection and finally made it into a Lutheran hymnal in 1969.  That means it was a new hymn when I was in elementary school!  I can remember singing it a lot as a child, not surprising seeing as a Lutheran pastor, Herbert Brokering, wrote it.  Apparently, until recently, the hymn was virtually unknown outside the Lutheran Church.  Read more.

Just in the Nick of Time 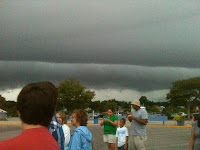 This evening, just before 7:00 PM, my family and I arrived at Ocean Beach Park in New London, CT to enjoy the final Wednesday night magic show of the season.  The featured magician was Zach Ivins, the son of my dear friend, Koalagirl.  He is quite the talented young man, excelling at magic, musical theater, acting, etc.  He and several other young magicians were recently featured in a documentary about Tannen's Magic Camp, a weeklong summer experi
ence that gave rise to the likes of David Blaine and others.  Zach has attended for a number of years and thoroughly enjoys his time there.  In fact, his mother has been known to say that Tannen's is home for Zach and he merely visits with his family the other 51 weeks of the year.

This summer, after magic camp, Zach took a job in upstate New York, teaching at a performing arts camp known as French Woods Festival.  He has been there for a week or so and came back especially to do the show this evening.  It was a pretty big gamble as thunderstorms were threatening the entire day.  Thank goodness they held off until the end of the performance, just until the end.  It was a rush to get all the props and equipment loaded as a full-on downpour swept over the park just before 8:00 PM.  The rain was so heavy that it caused us to traverse partially flooded streets all the way home.  But the trip was worth it.  Zach put on another great show that the audience loved. I can't wait to see what he has up his sleeve for next year.
Posted by Plush Duck at 9:56 PM Links to this post
Life Challenge: Entertainment, Friends/Friendship, Weather 1 comments

The Sacrament of Penance (Part 1)

A few days ago, I started looking at "The Sacrament of Penance," written in 1519.  Wow, what an education for a cradle Lutheran!  I never knew, for example, that Luther considered penance to be a sacrament.  Apparently, he did, although he eventually abandoned the idea in favor of just Baptism and Communion, the two sacraments that are used in the Lutheran Church today.  Frankly, whether or not Luther thought of penance as a sacrament isn't of much concern to me as a layperson.  What he had to say about faith as regards sacrament really hit home and made sense to me.  Read more.
Posted by Plush Duck at 4:53 PM Links to this post
Life Challenge: Faith/Religion 0 comments

A Wrap-Up on Fermata 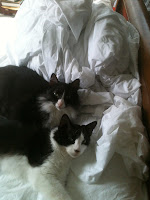 Now that we are approaching fall, one of the busiest times of the year here on Gooseberry Lane, I was thinking back on the beginning of 2012 and realized that I didn't give a final wrap-up on Fermata, my twelve-year-old tuxedo cat who suffered suppurative lymphadenitis this past winter.  As you can see from the photo (taken with his brother, Chopin;  Fermata is the one on the right), my baby is looking good.  He has regained all his weight and is on methimazole, an anti-thyroid medication, twice a day.  He still prefers the Science Diet Adult Light dry food, something I will work to replace with wet food at some point.  One interesting remnant of the social time that was built in to the feeding tube routine:  Fermata doesn't finish all his dry food anymore.  He leaves some that he then likes to eat from my hand.  I don't mind.  It is only about a teaspoon and it takes just moments, really.  I have the time and am pleased that Fermata still wants to hang out with "Mom."  I'm not sure how the hand feeding thing will go over with the cat sitter, though, the next time I go on vacation.

Note:  No compensation was received for any recommendations or referrals made in this post.
Posted by Plush Duck at 9:16 PM Links to this post
Life Challenge: Pets, Unexpected Events 0 comments

WEATHER ON THE LANE